1682 The Lord Proprietors granted Major Maurice Mathews, Surveyor General, and Captain James Moore, future governor, land grants for Lot No. 1 and Lot No. 102, an area which covers all of the properties associated with the Stoll’s Alley of today. Lot 1 fronted on East Bay, and Lot 102 fronted on Church St.  The southern border of both lots was Vanderhorst Creek, which was filled in the early nineteenth century and became Water Street.  The area between the two lots was marshland extending north from the creek.

1700 James Moore and his wife sold their property to Landgrave Thomas Smith II and his wife Mary Hyrne Smith. That same year, Smith received a grant for the marshland between Lots 1 and 102, on which the majority of the homes along the present Stoll’s Alley now stand. With this purchase, Smith owned the entire stretch along the present Stoll’s Alley.  Eventually, the marshland between the original Lots 1 and 102 was filled in, and the alley extended to its present length between East Bay and Church St.  There is little documentation about structures on Lots 1 and 102 while the Smiths owned the land. Between 1700 and 1748, however, a small passageway off East Bay was established to connect with Church Street through the interior of the property. Many informal documents state that small structures were constructed along the passageway, where harbor pilots lived. The area was called Pilot’s Alley, which later became Stoll’s Alley.

1736 William Screven (1712-1756), a James Island plantation owner, purchased the part of Lot 102 fronting on Church St. from Landgrave Thomas Smith. [Charleston County Register of Mesne Conveyance, Deed Book V3, page 210]. Subsequently, houses were built on either side of the Alley at 52 and 54 Church St.  Houses were also built on his property at the present numbers 6, 8, and 10 Stoll’s Alley.

1740 After the death of Landgrave Thomas Smith II in 1738, his widow Mary Smith sold another portion of Lot 102 to James Fowler, properties that are now numbers 9 and 11 Stoll’s Alley.

1747 Seven years later, Mary Smith sold land that was along the south side of the Alley behind the property facing East Bay to Justinius Stoll and his wife Mary Taylor Stoll.  Stoll (1704-1778), was a blacksmith whose shop was on East Bay next to Granville’s Bastion of the old walled city, a short walk away.  His portion of land included that of the present numbers 3, 5, and 7 Stoll’s Alley.  A 1-1/2 story brick house may have already existed on the property or he built it, the original building with dormers of the present 5 Stoll’s Alley.

Another son of William and Bridget Screven was Samuel Screven (1677-1731), who married [Sarah] Witter.  He was a planter on James Island.  One of their sons was William Screven (1712-1756), who in 1748 married Sarah Stoll, a daughter of Justinius and Mary Stoll.  It was to him that the Stoll’s conveyed 7 Stoll’s Alley.  William in turn conveyed the property to his brother James Screven (1706-1758), who was married to Mary Hyrne Smith, the daughter of William and Mary Smith.

1762 5 Stoll’s Alley was sold by the Stoll-Screven family to John Edwards.

In Charleston deeds E5 p.27, p.462 and F5 p.209, p.217, all relating to the property of current day No. 7 Stoll’s Alley, there is a description of the property indicating that in 1778, William Russell, vendue master, was in ownership of the property now known as No. 5 Stoll’s Alley. Either Justinius Stoll and his second wife Phoebe or John Edwards, who was mortgaging the property in the 1770s, may have conveyed the property to Russell. [Lavelle][The latter seems to be the case.]

1779 Phoebe Stoll, Justinus’ second wife, and Thomas Rivers, his executor, sold the property at 3 Stoll’s Alley. There was no house on the property until the mid-nineteenth century.

1783 William Russell was banished (as a Tory) and his properties were confiscated. He was indebted to Robert Farquhar, a maritime merchant who operated out of Charleston. Russell’s property on Stoll’s Alley was turned over to the Commanders of the Treasury.

June 19, 1783, registered in deed book M5, pg. 87, Robert Farquhar executed a mortgage to William Parker and Edward Blake, Commissioners of the Treasury of the State of SC, for a property described as town lot late of William Russell, on the south side of Stoll’s Alley, measuring 31 feet on the said alley and 135 feet in depth, the exact dimensions of the lot Peter Trezevant advertised in 1802.*

1784 At age forty, Robert Farquhar was killed in a boating accident at Savannah. The executor of his will was Alexander Chisholm. After the earlier death of his wife in 1773, Farquhar’s only child, Elizabeth Willoughby Farquhar (1772-1845), was put in the care of relatives in Charleston. Between 1782 and 1788 she was boarded in London, England.

1789 At age sixteen, nine months after her return to America, Elizabeth Willoughby Farquhar, married Peter Trezevant, age twenty-one, in Charleston. The two young people may have met in London is 1786 when Peter visited there. After their marriage, they probably took up residence at 5 Stoll’s Alley, which as part of her father’s estate she and her husband inherited upon her marriage.  Hence, there are no public records of the transfer of ownership at that time.

1809 During Peter and Elizabeth’s tenure at 5 Stoll’s Alley they constructed a two-story colonial-style frame structure adjoining the original brick house of c. 1748.

As a result of that inheritance Peter and Elizabeth Trezevant (ages 58 and 54, respectively) moved to 31 Chester Terrace, Regent’s Park, London, England, where they maintained residence for the remainder of their lives. Five of their thirteen children were already dead, one was living in India, and two were married and settled in South Carolina. Son Daniel Heyward Trezevant and daughter Ann Trezevant Taylor were in Columbia. The widow of John Farquhar Trezevant was in Darien, Georgia. The other five children accompanied their parents to London. One son returned to the States, and the other four remained in England.

1879 The property of 5 Stoll’s Alley was bought by Andrew Simonds, founder of the First National Bank of South Carolina, perhaps as an investment property. He apparently never lived in the house, which stayed in the family for over fifty years. Simonds willed it to his son Andrew Simonds Jr. who then willed it to his daughter Margaret Drury. [Wiedman, pp. 9-10]

1932 Alida Canfield, wife of George Dana Canfield, bought 5 Stoll’s Alley from her sister Mary Marshall.  Alida and George Canfield bought 50 Church St., the house next door to her sister, in 1918.  Alida Canfield planned to buy 9 Stoll’s Alley and tear it down to make way for a garden.  Instead, she began extensive restoration of that building and decided to buy others houses on the Alley.  She moved into 5 Stoll’s Alley in 1930, using the 1809 frame structure as her winter home. She later made her own addition to the house with an attached frame structure at the west end of the original brick residence. [Wiedman, p. 14]

1967 Alida Canfield died. She lived at 5 Stoll’s Alley during the years that she bought all of the other houses on the Alley and restored them. She willed 5 Stoll’s Alley to her daughter Frances Canfield Bonsal, and the property remains in the family today.

The first Alida Canfield rescued all of the homes in Stoll’s Alley from the slum-like conditions that had existed since after the Civil War into the twentieth century. Beginning in 1919 and ending in 1938, she bought and restored numbers 2, 3, 4, 5, 7, 8, 9, and 10.  (No. 6 was a tenement building that was raised.  No. 11 was a dependency of 52 Church St.). Every home was willed to her three daughters and their families, and some of the homes are still in the extended family. Those of us lucky enough to have personal connections to any of those homes must be eternally grateful to Alida Canfield for saving them. And all of historic Charleston can be grateful for setting such a high standard for historic preservation. 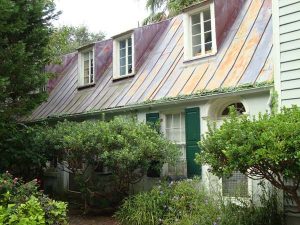 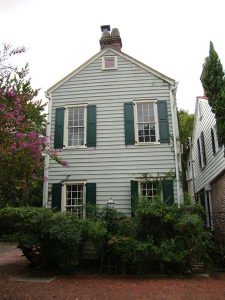 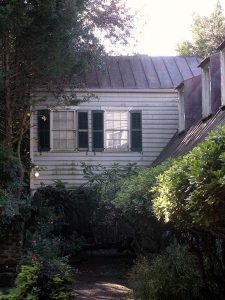