A biographical sketch by a grand-nephew,
Robert Warren Trezevant

Warren Trezevant had only one brother who lived to maturity, married, and had children–his younger brother, Charles Norman Trezevant. Charles was born on December 31, 1880, at Warsaw, Franklin Parish, Louisiana, and died in Delhi, Richland Parish, on August 21, 1957.

After Edna’s death Charles married Susie N. Stout on June 22, 1913. She was born on August 4, 1892 and died in February, 1982. They lived near Delhi and had two daughters. The older was Elsie Maria Trezevant, born in Delhi on November 7, 1915. She married Orie W. Hatten. She died on May 23, 2006, and is buried in the Twin Cities Memorial Garden in West Monroe, Louisiana, Ouachita Parish. The younger daughter was Lela Margaret Trezevant, born in Delhi on January 24, 1919. Lela married Henry Watts. She died February 13, 1994, in Tallulah, Madison Parish.

Shortly before her death Lela attended the ceremony in Delhi’s Masonic cemetery to honor the restoration of the tombstone of her great-grandfather, James Peter Trezevant (1815-1860). A local historian, Dorothy Bradley (1913 -2011), planned the restoration and ceremony. Our immediate branch of the family was represented by my sister, Carolyn Louise Trezevant (1944 – present). Those two Trezevant relatives were first cousins once removed. 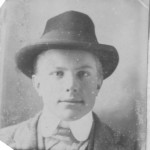 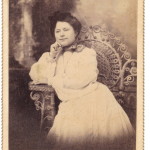