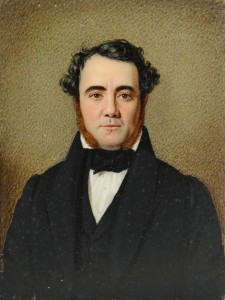 Miniature portrait on ivory of Dr. Octavius Undecimus Trezevant (1810-1866) of Charleston, South Carolina and later, New Orleans. Born in Scotland in 1810 to Peter Trezevant (1768 – 1854) and Elizabeth Willoughby Farquhar (1772 - 1845). Red leather case. Octavius became a physician and moved to New Orleans where he maintained a practice. He was known to be staunch American and married a distinguished Spanish woman of Buenos Aires. In 1866, Dr. Trezevant was killed by a black soldier while attempting to protect a white woman in New Orleans. He is referenced in the book: An Absolute Massacre: The New Orleans Race Riot of July 30, 1866, J. G. Hollandsworth . Biography reference - The Trezevant Family in the United States by John TimothŽe Trezevant, 1914. Sight: 4-3/8″ H X 3-1/4″ W, Case: 6″ H x 5″ W. Second quarter of the 19th century. Also included with the lot are two letters from Edith Booth dated September 1934 and August 1937 to “Madawe” with a Hailsham Sussese address. She references the Trezevant miniatures in her 1934 letter and then references them again in her 1937 letter, “I am perfectly willing at any time to part with the portraits & minisiatures if they are wanted at any time..I do not feel that I could put a price on them but I could not pay expenses.”