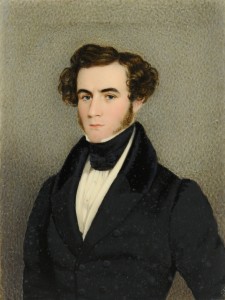 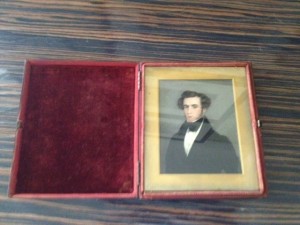 SC Miniature portrait on ivory of Dr. Daniel Heyward Trezevant (1796 - 1873). Born in Charleston, South Carolina to Peter Trezevant (1768 - 1854) and Elizabeth Willoughby Farquhar (1772 - 1845). Died in Columbia, SC. Red leather case. Sight: 4-1/8″ H x 3″ W. Case: 5-1/8″ H x 4-1/2″ W. Dr. Daniel Trezevant authored “The Burning of Columbia S.C.: A Review of Northern Assertions and Southern Facts” in 1866. This was an eyewitness account by Trezevant, then a fifth-year resident of Columbia, of the 1865 event. He had one daughter and nine sons, four of whom served in the Civil War on the side of the Confederacy; two of them were killed. Another son was killed in the Mexican War. As John Timothee Trezevant wrote in his book about the Trezevant family, Daniel Trezevant was considered a “distinguished, accomplished physician…His house was fired on by drunken Federal soldiers while he stood by and looked on appealingly, in vain, for the privilege of carrying from the burning building the pictures of those who were dear to him, and had died years before. All during the hard times of the last year of the war, the old gentleman had his house full, not only of his own children, but grandchildren, and no man in Columbia gave more liberally to charity and the aid of many who saw starvation coming in the door during that trying period.” Biography reference - The Trezevant Family in the United States by John TimothŽe Trezevant, 1914. Sight: 4-1/8″ H x 3″ W. Case: 5-1/8″ H x 4-1/2″ W. Second quarter of the 19th century. Also included in the lot is a letter dated Sept. 24, 1937 referencing the miniatures, “She (Mrs. Lloyd) would like me to send the miniatures to her by next Friday, but I am not sending all of them. I feel that those of Mr. & Mrs. Trezaevant, Daniel Heyward Trezevant, Octavius Undecimus, Theodore Mathias and the baby of Charles Edward should go to a direct descendant of Daniel Heyward Trezevant, therefore I am keeping those for Ms. Hanahaw.”