A biographical sketch by a great-grandnephew,
Robert Warren Trezevant

George Timothy Trezevant was the third and youngest son of James Peter Trezevant and Mary Hicks Trezevant. He was born in Cayuga, Hinds County, Mississippi, on October 22, 1846. Along with his parents and two older brothers he moved with the family to Deerfield in northern Louisiana in 1852. Deerfield (now Delhi) was in the original Carroll Parish; Delhi is now in Richland Parish. They left Mississippi when George was only six years old.

Only a few years after their arrival George’s older brother, Vernon Charles Trezevant, died at age sixteen. His father, James Peter Trezevant, died four years later in 1860. Their tombstones are considered the oldest in the Masonic cemetery in Delhi, though it is likely the slabs were put in place later, since each one is large and made of etched marble.

In 1862, at the age of sixteen, George joined the Confederate army and served until the end of the war. He then studied medicine in New Orleans, graduating in 1869. He set up a large and lucrative practice in Tallulah, Madison Parish, Louisiana.

On December 7, 1871 George married Julia Scott, who was from a well-known Tallulah family. She was the widow of Elijah W. Groves. She already had two children, Annie Louise Groves (1867- ) and Celia Agnes Groves (1869- ). My understanding is that the girls took the Trezevant last name. Annie Groves Trezevant married Frank Brown in 1887. Celia Groves Trezevant married Claude C. Buck in 1896 in Taylor County Texas.

George and Julia had four children of their own. Julia Groves had received a life insurance payment at the death of her first husband and she and/or her daughters inherited land from his estate. There was litigation involving the land and much of it was lost. As of 1875 the George Trezevant family lived on Pinch’em Easy plantation, which covered several thousand acres in Madison Parish. At some point the boundary between Madison and Tensas parishes was moved.

According to his obituary George Trezevant left his home in 1875 because of ill-health to set up a practice in Abilene, Texas. He went with another physician from Tallulah, Dr. J. H. Bass. Mississippi historian, Charles F. Bass, Ph.D., M.D., wrote to me about George Trezevant:

“He has always been a mystery to me as he is the only non-Bass in the Bass plot.  Scott was the family name of Dr. J.H. Bass’ wife, nee Amelia Scott.  Her father, T.B. Scott, was sheriff in Tallulah as the Civil War came to a close and Mrs. Geneva Williams was so kind as to show me his house and tombstone in April several months ago.  Her mother, nee Mary Darden, is also buried in the Bass plot in Abilene.  Much more information is known about the Darden and Scott families.  Obviously, a *great* deal more information is known about the Bass line.  It is for me to observe, however, that GTT’s life seems to parallel that of Dr. J.H. Bass in many regards, particularly as pertains to geography and dates.  Were they medical associates or classmates?  Did they enjoy a mentor-student relationship?”

In any case his obituary ends by noting,

“As a physician he stood among the first; as a man he was bold and fearless in the discharge of his duty. He was indeed the true type of a Southern gentleman. While living in Louisiana he filled several offices of trust with honor to himself and to his parish. He was a member of the American Medical Association. An aged mother, a wife, four children and a brother, together with hosts of friends, mourn his loss.”

While growing up in Texas and visiting family in Louisiana, I never heard mention of George Timothy Trezevant or his family. However, at least one photograph in an album prepared in 1903 by my grandmother, Eula Foster Trezevant (1883-1977), contains a photo identified as one of his sons, Claude Trezevant. The album also contains a photo of Annie Louise Trezevant as an infant. There may be other photos in the album from George’s family but the photos are unlabeled. 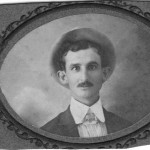 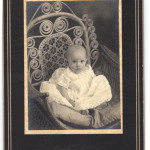